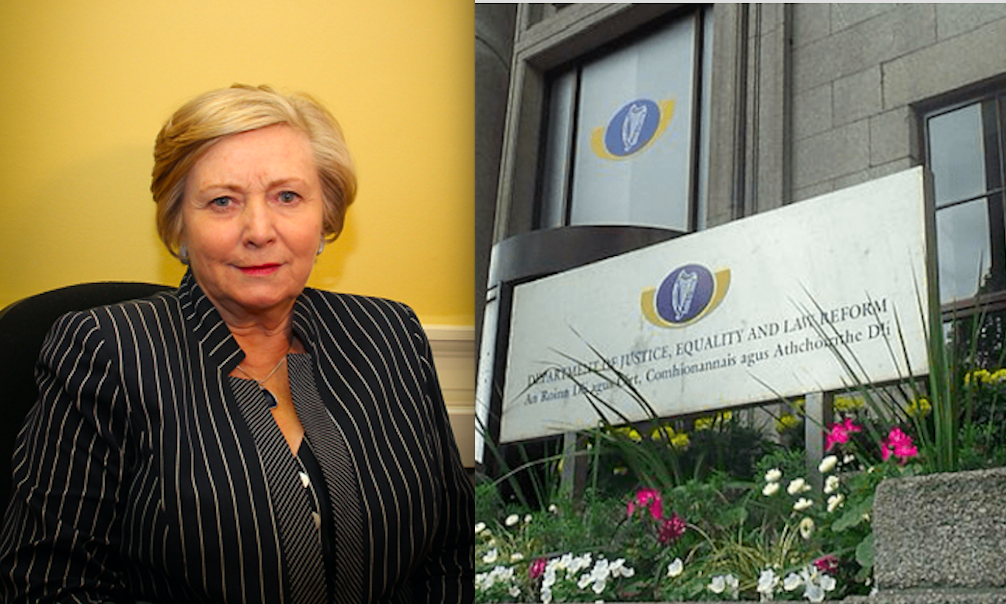 Records released by the Department of Justice show PR expert Terry Prone and her company the Communications Clinic were paid €55,000 for advice on speech writing and strategy by former justice minister Frances Fitzgerald.

The details of the payments were contained in more than 190 emails released by the Department of Justice after an eighteen-month battle for access by Right to Know.

The payments were made almost every month from April 2014 until February 2017, the time period covered by the original Freedom of Information request.

The Communications Clinic normally billed Ms Fitzgerald €1,845 each month with the invoices addressed to Frances Fitzgerald, Leinster House. The money was paid through what’s known as the special secretarial allowance, which is paid by the Oireachtas.

The 190 emails were released after the Information Commissioner ordered that the Department of Justice contact Ms Fitzgerald to ask if she held any further records.

The Department of Justice had originally claimed no records existed but have now apologised to Right to Know for the management of the original request and said “the request was processed in good faith”.

“Many of the records relate to services which were procured by the then Minister directly,” they said.

“These records were not initially identified and were therefore not available for consideration at the time of the original request. Following queries from the OIC [Information Commissioner], email accounts, which had by then been archived, were examined by officials and records identified. Additional records in the archived accounts were located in the course of the detailed search completed over the past weeks and these have been subject to consideration in the decision.”

You can read that decision in full here: https://www.oic.ie/decisions/ken-foxe-right-to-know-th/

Unfortunately, the records have not been provided in a format that makes them amenable to scanning (3-400 or so pages printed out double-sided).

The story below gives a good overview of the contents however. You can see some of the emails themselves on this Twitter thread:

COMMUNICATIONS guru Terry Prone rewrote sensitive speeches for ex-Justice Minister Frances Fitzgerald to make them “tougher” or sprinkle in “magic words” to spice them up.

Her advice is contained in more than 190 emails between Ms Prone and Ms Fitzgerald and her advisors, which the Department of Justice had originally claimed did not exist.

The correspondence was released after the Information Commissioner ordered the Department of Justice to carry out a fresh trawl for the documents and insisted as well that Frances Fitzgerald’s private email accounts be searched.

For an important statement on the Cooke report into allegations that the Garda Ombudsman was under illegal surveillance, Ms Prone changed the speech to make it “much tougher”.

Prone italicised part of the June 2014 speech as well to “remind the Minister that this is her flat-handing the table on behalf of the citizen and demanding action and an end to defensive posturing”.

During the same controversy, the minister had penned a newspaper article attacking Independent TD Mick Wallace over his public comments on the report.

Asked for her input, Ms Prone wrote: “I’m both sorry and glad I didn’t get to this when it was first crafted … If the Department wants to give legs to a dying story and put Deputy Wallace on every radio and TV station for the next week. I would heavily recommend against that course of action.”

Advised not to rely on official garda statistics…

In another, Ms Prone advised Frances Fitzgerald not to rely on official garda statistics in a speech in September 2014 because they could easily end up being wrong.

She wrote: “You will note that I have taken all statistics out of it. Given the impending Inspectorate report, and the likelihood that the report will question some of those statistics, it would be unwise for the Minister to unquestioningly quote from a Garda Síochána Annual Report.”

Many of the communications are between Ms Prone and Marion Mannion, who was special adviser to Minister Frances Fitzgerald at the time.

“Minister, the two asterisks indicate a gesture of index finger wagged from side to side,” Ms Prone wrote.

For another to be given at the McGill Summer School in July 2014, Ms Prone wrote: “I’m sorry this took so bloody long, but I wanted to keep as much as I could of … [the] draft while moving it away from meddling in the innards of the Gardai.”

In instructions for the same speech, Ms Fitzgerald was given very specific advice on her body language.
“Minister, the two asterisks indicate a gesture of index finger wagged from side to side,” Ms Prone wrote.

Ahead of a speech for a citizenship ceremony in September 2014, Ms Prone gave a significant rewrite.
“This is radically re-written,” she said, “for two reasons. 1/ The original was too long. 2/It was patronising, ‘host country’ stuff. In fixing 1/ above, I have removed Alan Shatter and defensive references to process improving. Why should those present give a toss?”

Details of one speech from May 2014 have been withheld on the basis that they are the “private papers” of Frances Fitzgerald.

An email exchange about it explains how Marion Mannion was “in constant despair!” over the quality of a draft of the speech.

In response Terry Prone wrote: “Marion, no offence, but the latter was certifiable.”

Ms Mannion later responded to the rewritten version: “Thank you for another masterpiece … think you are being kind to draft submitted.”

“Thank you for another masterpiece”

On other occasions, the draft speeches sent to Ms Prone do not seem to have presented such difficulties.

Responding to one titled ‘Response to Deputy [Shane] Ross’ from June 2014, Ms Prone wrote: “This is a beautifully argued speech with which I should not interfere, because it is coherent and consistent in tone throughout.

“Because the argument is laid down, layer on layer, the Minister needs to read it out loud at least twice so she can do it justice. Tess.”

Minister Fitzgerald personally sought a rewrite of another speech that was to be delivered at an event in London in front of the then prime-minister David Cameron in December 2014.

A note from Marion Mannion said: “Min[ister] feels speech really needs a lift and who better to give it an almighty lift but yourself.”

Ms Prone also offered tactical advice on how to head off pending controversies including one where ex-minister Alan Shatter accused the government of delaying a piece of family law legislation in February 2015.

Terry Prone said: “You could tell her that I’m finding no interest in the part of journalists in Alan Shatter’s criticisms: they see them as belonging to last week. The news bulletins have pushed him to one side.”

She also said if the delay issue did end up being raised, Minister Fitzgerald should say something like all “the controversies around the former Minister [Shatter] had put a speedbump” in its progress.

For another, Ms Prone advised dropping a list of legislation for a speech to be given for a rape crisis centre in June 2015.

“Seems to me to be unappealing, ergo worth the chop,” she wrote, “but which may, from your point of view, be vital.”

Ms Prone was occasionally withering in her tone about speeches that she was changing.

Ahead of another talk at the McGill Summer School in July 2015, she wrote: “I’m sorry, but I’ve had to cut away three quarters of the original. Not the venue for the Encyclopaedia Britannica of Departmental self-praise.

“I think you’ll find now it addresses things that have been niggling (like culture) has a recurring theme that allows us to stress the importance of consultation/listening and has a bit of humour. Shout at will. Tess.”